This is me, looking happy that the subfloor is done. The camer is basically at the front door, looking west through the future living room. This is the still wet upper level, looking from the front door towards the first bedroom 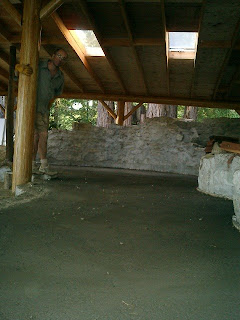 This is taken from what would be a kitchen cabinet level, looking north from the south side of the kitchen. You can see the temporary lid to the trapdoor to the cold box in the floor about midway. 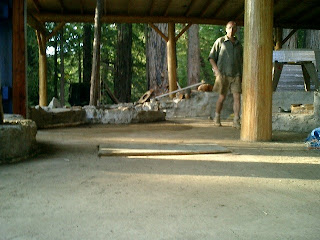 How to Make a batch of Floor Cob:
First, get 3 five gallon buckets of road base: 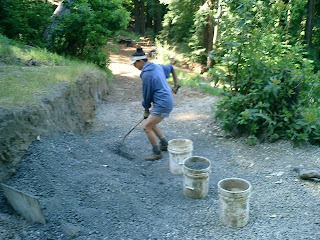 Spread them out on your mixing tarp: 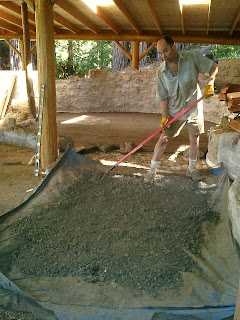 Add 1/3 bucket of pure (local) clay, and pick out any organic material like leaves and sticks: 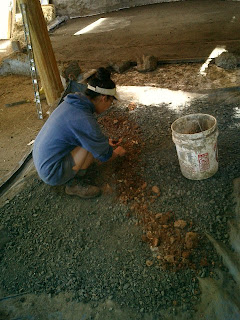 then, spread out the clay and stomp on all the clods, ideally getting all into powder: 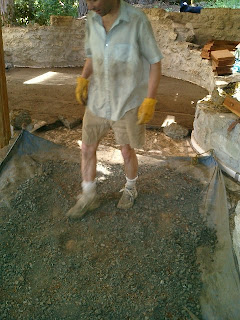 Then, start mixing it up, first by tossing in the corners: 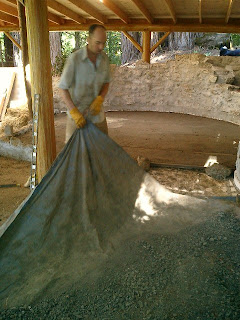 then giving it a couple of 'burrito rolls': 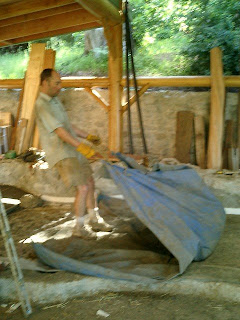 Then add water and dance on it to squish the clay around the sand and gravel: 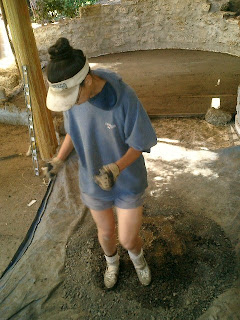 After you get in about 2 or 3 gallons of water (depends on the dryness of the material) add straw, and stomp: 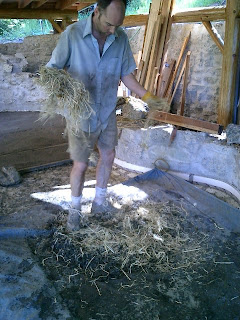 When it all looks mixed together, and everything has a coating of clay on it, call it done: 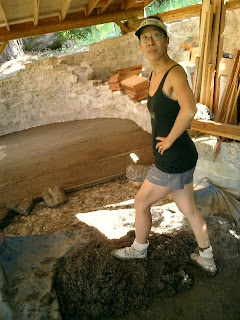 Toss it into place, stomp it in, and screed it flat. Repeat. 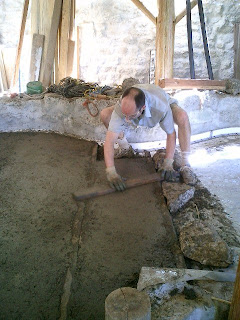 Working through the upper layer

We're on the job on the final level, putting in the subfloor in the bedroom and entryway. 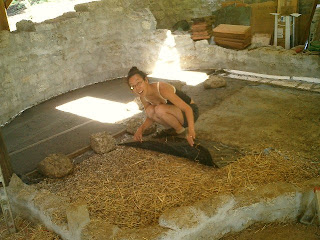 Melissa is showing how we're putting down some plastic as a vapor barrier under half the room, as she feels there's not quite enough gravel down below the surface to deal with potential moisture coming up from the earth. (I, of course, believe there is, but that's another story)

We're also making this layer a bit thinner, about 1.5 inches thick, since we don't want the finished floor to be too high. So, this whole subfloor project will be about 3 different experiments; vapor barriers and no barriers, perlite and not, depth of subfloor, type of gravel used, etc. I'm sure no one will care years from now, but at least we'll have answers!
at May 25, 2009 No comments:

Email ThisBlogThis!Share to TwitterShare to FacebookShare to Pinterest
Lower Section subfloor done
We finished the subfloor on the kitchen and bathroom level the other day, which feels like a big milestone. We do still have to do the shower pan, but with the slope in it, it won't take much more cob. This is a view looking south, sort of out what will be the bathroom door. 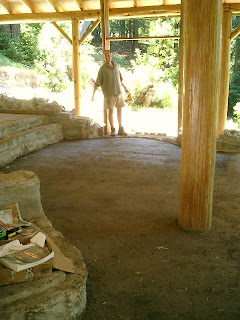 This is me sweeping the kitchen subfloor, taken from the eastern end of the living room. You can see the drying cracks in the surface in this photo, that's no big deal, as we still have two more layers to go on top of this one. 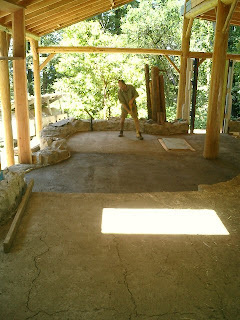 A new 'stage' in mudding in the floor

Well, we've gotten far enough now in the floor process to start making more floor mix ON the previously made floor. I know, it's not really that big of a deal, and doesn't actually help or anything, but it feels different. 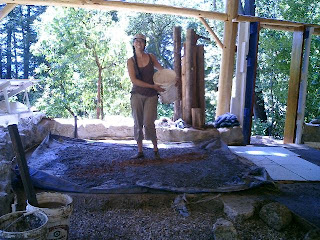 Here you can see the lovely Melissa with the ever-handy 5 gal bucket, having just dumped 1/3 of a bucket of clay onto 3 buckets of road base. Below the tarp she's standing on, you can see the 3 inches of subfloor looking good.
at May 19, 2009 No comments:

A bit of road base

did I mention I moved about 3 tons of road base gravel before lunch? Got this pile off the truck, after going to get it after breakfast. Maybe it doesn't look like much, but it's enough. This material is from Langley Quarry, which pulls this stuff right out of the ground about 20 miles from here. Local materials! 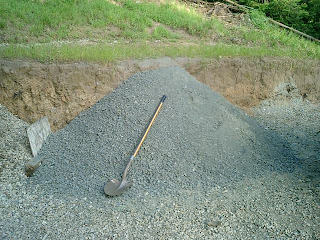 Email ThisBlogThis!Share to TwitterShare to FacebookShare to Pinterest
More water proofing of the bermed side

Well, because 18 inches of mortared stone wall seemed a little light, and more than 3 feet of overhang might not cover everything, and the continous 4 inch drainpipe underneath the entire edge of the foundation might not carry all the moisture, Melissa thought we should do some more water proofing on the outside of the stone wall that will be bermed in.
When we attached the underlayment to the roof, it had a peel-away plastic, so it would stick down. Well, that means we have 2000 sq feet of this thin black plastic that we're supposed to just throw away. I'm not a big fan of filling up the landfill, so I started thinking it could be used for a waterproofing layer.
I took some old (free) paint and slopped some on the flattened cardboard boxes that the underlayment had come in, and 'glued' the black plastic film to it, in successive layers, like shingles. 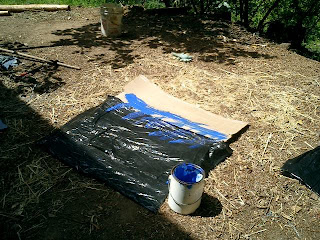 Then, with about a dozen of these plastic covered cardboards, I layed them against the outside of the wall, again in a shingle-like pattern, one covering the next edge. 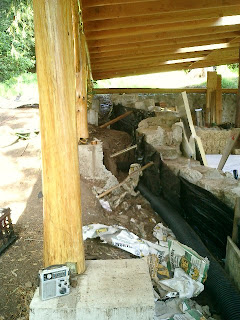 Thinking the stuff might want some more protection, I found some more old wrapping garbage under the yurt (the material was sort of a paper with fibers in it, like packing tape, but 4 ft wide and 12 ft long) and covered over the outside before tossing in some old styrafoam pieces that I needed to get rid of, and then maybe 20 buckets of gravel, for more drainage. 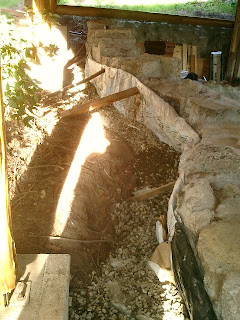 I realize it's just the subfloor, and more layers are going on top of this, but we're really happy about having the center section - at least a third of the house -- completed. There's 3 inches of clay and heavy gravel on there, drying up in a very nice and flat floor that will allow us to work on the rest of the house on a flat surface. 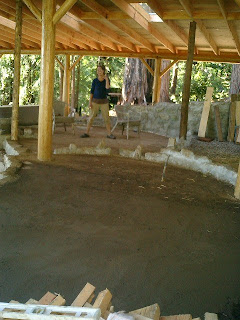 When they put the gutters on, they couldn't do what I wanted, which was have the downspouts on the east side, so they'd be on the uphill side to facilitate draining to slightly higher ground.

I was hoping to have rainwater tanks that might allow gravity flow to the bathroom and kitchen, but it looks like I've got a water pump plan in my future. 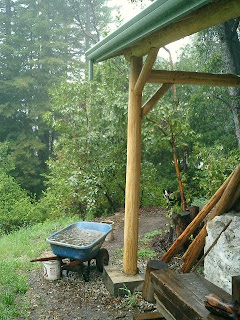 Here you can see the spout now on the west side. If we'd have thought about it, we could have built a bit of a slope into the roof to allow for eastern flow. Ah well. Now I'll have some sort of 'rain chain' that will probably go to a bowl below the surface of the future patio, which then drains to a holding tank.
at May 03, 2009 No comments:

Small Details in the Clearstory wall
Now that the roofers are out of the way, I needed to get back to the clearstory wall and get that further along. I've been hesitating to build the wall sections between the windows, because it looks like I'll have to cover up the knee braces (the "Y" arms) on the inside of the house, due to the way the windows are situated. You will still see them from the outside.
So, I added the little bits of plywood to the interior of the "Y"s, and then added the blockers that will support the plywood on the inside. 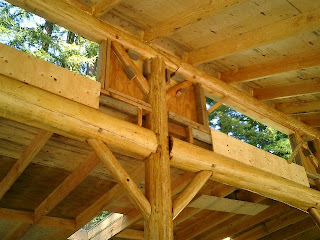 Here's a close up. This will get filled with rigid foam insulation, and possibly some of that spray foam stuff. Then, the outside will probably get an earthen plaster that will match the rest of the house, so those gaps will be taken care of by that process. 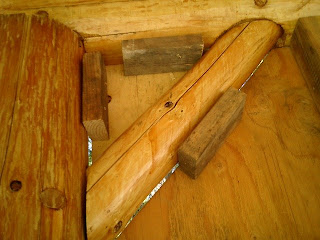 Email ThisBlogThis!Share to TwitterShare to FacebookShare to Pinterest
More Gravel floor work:
Having changed our minds again about how we're going to put in the subfloor, Melissa has gone around and put the necessary 1 inch insulation around the perimeter of the house, and then we've filled up the interior with another inch of gravel. We were going to do 4 inches of subfloor on the kitchen and bathroom sections, but now we realize that we can get awary with 3.

After I dumped and spread the extra gravel, Melissa again went around and leveled and tamped it down: 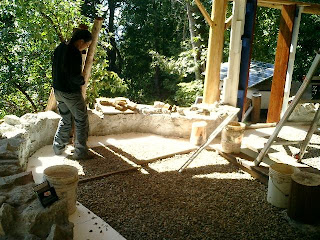 In these pictures you can also see how she's done a great job of piecing together the insulation and having it fit nicely around the curves of the walls. 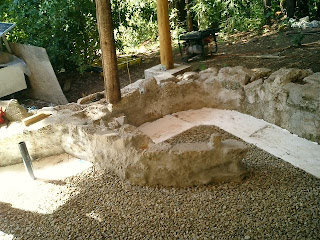 The above is the bathroom section, with the foundation for the wall between the shower and toilet showing in the foreground.
at May 01, 2009 No comments: 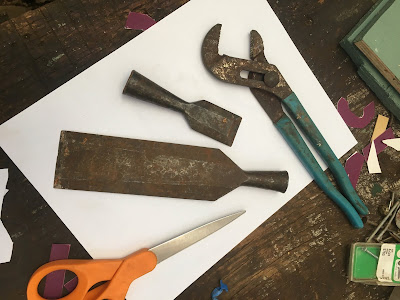